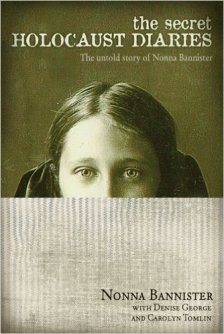 The cover of “The Secret Holocaust Diaries: The Untold Story of Nonna Bannister.”

With Jan. 27 being set aside for International Holocaust Remembrance Day, I wanted to share my 2015 Chester County Independent piece on the the importance of the holiday and what we can learn from the tragedy it memorializes.

Jan. 27 has been observed as International Holocaust Remembrance Day. It’s a day when the world pauses and reflects on one of the most horrific times in history. The Holocaust was the annihilation of not only six million European Jews, but untold millions of eastern Europeans –including those with mental or physical handicaps, religious groups and others by the Nazi regime.

In reading memoirs and biographies of survivors and children of survivors, each person, basically offer this advice: “Always remember the Holocaust: Never forget. Tell children and young people to never forget this horrible time in history.” This day is set aside to urge every nation of the U.N. to honor the memory of Holocaust victims and to encourage the development of educational programs about Holocaust history to help prevent future acts of genocide. This day, Jan. 27, 1945, was when Auschwitz-Birkerau, was liberated by Soviet troops.

Coming from a wealthy and well-educated family, Nonna’s father tried every resource to take his family to a safe area. However, all the borders were closed. Keeping his family safe proved impossible. Family photos saved in a little ticking pillow Nonna wore tied around her waist pictured a father whose face showed stress and turmoil. Yet, Nonna wrote that her parents tried to have as normal a home life as possible.

As parents, what lessons can we teach from the Holocaust that will help children deal with the future — whatever that may be?

First, that giving a child a strong, solid foundation is important for now — as well as the future. During Nonna’s darkest days as a prisoner in the labor camps, she would think back to those wonderful days of childhood and recall those happy times at her grandmother’s Great House in Konstantinowka in the Ukraine.

Nonna’s father stressed education — especially learning different languages. Being a wise man, he often said, “Knowing several languages could save your life.” This proved to be true, as a Nazi general assigned Nonna as a hospital translator for other nationalities who were ill.

Another lesson is the ability to learn forgiveness. After Nonna’s father had been beaten by the Nazis and was near death, he told Nonna to forgive those who beat him. Wise parents realize the value of teaching forgiveness. Those who survived and were able to forgive had a better chance of having a normal life after the war. Carrying a grudge causes both mental and physical illness.

Look for lessons learned in the Holocaust to share with your children.

Carolyn Tomlin, Jackson, is the co-author of The Secret Holocaust Diaries: The Untold Story of Nonna Bannister (Tyndale House Publishers). You can purchase a copy of the book on Amazon.