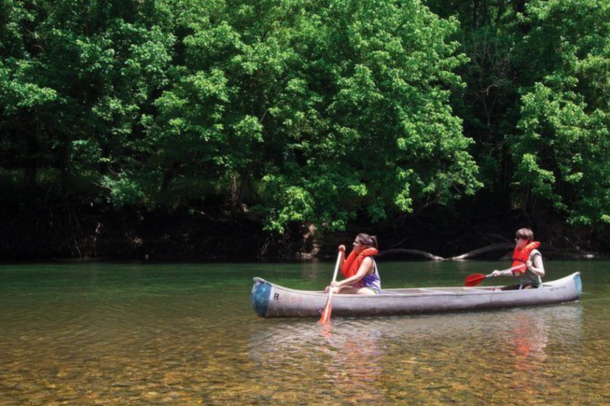 The Niangua River is known for its put-in-and-go type floats. Hot summer days often make this a popular float trip near Lebanon/Missouri Life

The day dawned mild and sunny on the Gasconade River in southwest Missouri. As veteran floaters of this waterway, we anticipated a quiet, peaceful trip. And that’s just what we got. Using a large four-seater Osage canoe made in Lebanon, our group put in at Austin Ford on Wright County’s Route E for this short trip, and took out at Buzzard’s Bluff. Handling our own transportation, we tied the canoe to the top of a farm truck.

With two vehicles—one to leave at the pickup point and the other to transport the floaters and canoe—we set off for a day on the river. Packing simple provisions of Spam, saltines, plastic bottles of frozen water, and a few other items, we feasted on a gravel bar with a repast that tasted more like a five-course luncheon than a meal from a can. The bottled water soon warmed—but it was still wet!

Life on the river carries its own unique lessons. Here, the senses are on overload in this peaceful environment. There were times when the only sound was of the paddles dipping and lifting in the current. Once, we froze in silence as an otter and her young cavorted among the tree roots on the nearby bank. Yet these playful little imps showed no fear of us. One of the wiser Missourians in our canoe surmised, “It was because nothing in the water had ever done them harm.”
Fat cicadas drowned out our voices with their rhythmic siren song. Noisy crows called from tree to tree. An eagle circled overhead as if leading us to the next tributary. Along the banks, bubbling waterfalls poured from steep limestone bluffs. Maidenhair ferns flourished in moist crevices. Giant sycamores interlaced their branches joining opposite banks. All the while, sunlight danced on the blue water like beams from a hidden light.

A canoe float on a peaceful, uncrowded Missouri river holds its own delights. Especially if you’ve never done one before, add a canoe and float trip to your bucket list of things to do this summer. There are dozens of rivers in the Show-Me State where canoes are the accepted mode of travel. Here are five Ozark waterways that not only serve as rites of passage for any aspiring canoer, but also promise a quiet respite from the weekday world of harried humanity.

Click here to read the full article for Missouri Life.

Carolyn Tomlin is a Jackson, Tennessee-based author that has been writing and publishing since 1988. She has authored 19 books and more than 4,000 articles in magazines such as Entrepreneur, Kansas City Star, American Profile, Tennessee Home & Farm, Home Life, Mature Living, ParentLife and many others.